Welcome to the World of Halo Action Figures!

Have you played Halo?

Halo is a massive ring world created by a long extinct species; the Forerunners. Mystery surrounds their motives and we won’t spoil the plot of the first game for you. Suffice to say this enormous, heavenly body is more than what is on the surface.

In the year 2552 humanity is fighting a losing battle against an aggressive alien force known as the Covenant. After the warship Pillar of Autumn is boarded by these hostiles it crash-lands on the titular ring-world and the surviving marines are pulled together by the Master Chief.

This is a genetically modified Spartan super soldier, trained from childhood to be the toughest one-man army in existence. The planet Reach, where the Spartans are forged has just fallen to The Covenant, making Chief the last of his kind.

Master  Chief sets out to rally the beleaguered troops, push back the alien threat and discover deep secrets as to why they want this world so badly. He has Mjolnir armour, military firepower, defence shields, superhuman reflexes and incredible strength and stamina. He will need every ounce if he is to survive the merciless onslaught of what awaits him out there on the halo.

This was the premise of the 2001 launch title video game for the original Microsoft Xbox; Halo: Combat Evolved. This was a key title in the tenure of this console and made the development team, Bungie major players in the triple-A blockbuster games market. It has since spawned two direct sequels, a spin-off, a real-time strategy, a prequel, and HD remake and with 2012’s Halo 4, the first of a new trilogy, now being handled by Microsoft’s 343 Studios.

If you’ve not yet had the pleasure, we recommend Halo: Anniversary Edition, the 343 remake of the original. It has been polished up and still holds up extremely well against modern shooters. Or you could jump straight to Halo 4 which is an excellent reboot.

Joyride Studios have in business for over fifty-five years they have produced a wide range of collectors’ items, from James Bond cars to MechWarrior and Battlestar Galactica action figures.

In 2003 Joyride were licensed to produce action figures, with Bungie Studios, for the original Halo: Combat Evolved game.

The first three figures that were produced were the Master Chief, (left) Chief’s AI companion; Cortana, and a Warthog all-terrain vehicle, which were an instant success with collectors and fans of the game.

As a result Joyride and Bungie went on to release a total of five series of  Halo: Combat Evolved figures as well as several "exclusives", which were produced and released in selected stores.

A lot of these were variant coloured versions of Master Chief playable in the multiplayer of the games and billed as Spartan warriors. Others were the same classic green but with new weapons like the Pistol, Shotgun, Rocket Launcher, Covenant Needler and grenades.

Series 2 featured a Covenant Elite (the ferocious Spartan equivalents on the Covenant side) in blue, a Covenant Ghost vehicle and a red Spartan. In January 2004 Joyride expanded series 3 to incorporate six figures with a blue Spartan, a Covenant Banshee vehicle, two marine figures, the first of which had two variants, one with blond hair and one with red and a key character in the first trilogy; Sgt. Johnson.

Series 4 followed later in the same year with four new figures.  Similar to the previous series this release included a White Master Chief, an Orange Grunt (the chirpy, cowardly foot soldiers of the Covenant), a new Warthog vehicle and a Red Elite.

Series 5 emerged in August 2004, again with four figures: Black Master Chief, Flood (Carrier Form) which was the first figure of the hideous Flood species, a Red Grunt and a Gold Elite (right), which is one of the rarest Halo figures to ever be produced. 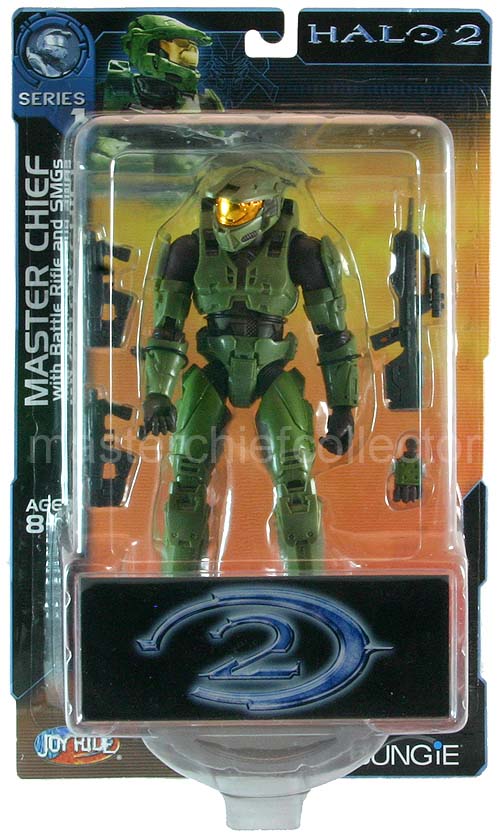 In October 2004 Joyride Studios released their first Halo 2 figures to coincide with the new game which arrived in November of that year.  These included the newly Mark VI-armoured Master Chief, a Brute (the fearsome ape-like species that debuted in this second game) and a new Warthog vehicle. Typically the Spartans had around 18 points of articulation and varied accessories that encouraged collecting many different figures to build your armies and arsenal.

Joyride went on to produce eight series of Halo 2 figures between August 2004 and July 2006, with a total of forty-one figures and twenty-two exclusives!

These figures, like those based on the first game were typically made in the notoriously difficult-to-market eight-inch scale. The vehicles were on the same pegs as the figures but were in entirely different scales, something which eventually came to be a drawback of this series as it limited both play and display potential. Instead there were smaller 1/18 scale mini-figures sold in multi-packs which could interact with the vehicles, but lacked the detail and collectability of their larger brothers.

In 2006 they released two final figures, the White Elite and the Jackal Sniper, but these were not officially released or sold through the regular retail stores, but remained exclusive, limited editions.

Understandably these figures weren’t always easy to get hold of and due to the lack of availability their prices often skyrocketed on the secondary market, sometimes to hundreds of dollars. As a result of this collector demand and the continued success of the games, there is still a very active secondary market for these Joyride figures to this day on sites like eBay and Craigslist.

Despite their market success and popularity among fans and collectors Joyride Studios were eventually replaced as license-holder in 2008 by industry giants McFarlane Toys.

McFarlane released their first Halo 3 figures in March 2008, some six months after the release of the third game which topped media sales records. They were an immediate and immense success with fans.

The first series featured a five-inch Master Chief with most of the corresponding figures hitting appropriate sizes for display and play (for example the Brute Chieftain is seven inches high, towering over the already tall hero). Chief and his companions had 18 points of articulation and possessed the feature of removing shoulder, and chest armour and their helmets to mix and match the various Spartan looks and emulate the customisable multiplayer character creation in toy form.

The initial four series of Halo 3 figures maintained this five-inch scale, and each series is notable for being immense with often two-dozen figures released.

After this there were four more series (5-8) in a larger six-inch scale, marketed alongside the new Halo Reach figure series, again in this larger size. This Reach series ran from September 2010 to February 2012 and managed six series of its own.

McFarlane were also responsible for figures representing the Halo 3: ODST, Halo Wars, and Halo Anniversary games launched in 2009, 2010 and 2011.

Halo Wars, being an RTS game and all about the troops had its own set of 2-inch mini figures, and as of August 2012 a Micro-Ops line of tiny figures, vehicles and playsets in 1/100 scale was also launched. These are actually resplendent of Airfix models so anyone with a prior interest in that side of toy collecting will doubtless see the potential for the military series being represented in this manner.

For fans of statues, there was also a Legendary line released in 2009 comprising three key character types in dynamic poses.

For a long while any vehicles released were in a small scale and once again did not fit the standard figures. Then in 2010 two classic vehicles (Warthog and Ghost) were released under the Halo Reach name. They were in the earlier Halo 3 style five-inch scale. And fit with older figures, effectively giving fans what they had been wanting for years.

Moving forward, the new Halo 4 figures, released August 2012 in the run up to the launch of the game in November maintain the six-inch scale laid down by the Reach and later Halo 3 series’.

These new figures are more durable and conducive to play and as always the basic figure the entire series is based on is the Master Chief in his new armour set. The new Elite and Grunt are also present and there are box sets including the Chief’s cryo-tube and a four-pack with the above three figures and a limited edition blue Spartan warrior. Series 2 is dated for release later in 2012.

In terms of the game, the handover from Halo creators and long-time series development team, Bungie to a studio effectively established by Microsoft to kick-start a second generation was one that made fans cautious. Fortunately 343 Studios’ HD remake was solid and Halo 4 has been dubbed the best in the series by many reviewers. The license appears to be in good hands for the time being, both onscreen and off.