Johnny was a very basic, generic figure produced by Rosko Industries of New York in 1965, only a year after Hasbro's G.I. Joe was released.

He came packaged in a fairly plain cardboard box featuring a track and field runner dressed in silk track shorts and a short-sleeved shirt with trim (piping).

The reason I've featured him as the very first NFL action figure is because, despite coming dressed as a track and field runner, 22 NFL team kits were produced for him.

However, Johnny's career was probably the shortest in NFL history as he only lasted for two seasons in the Sears catalogue before he was axed. 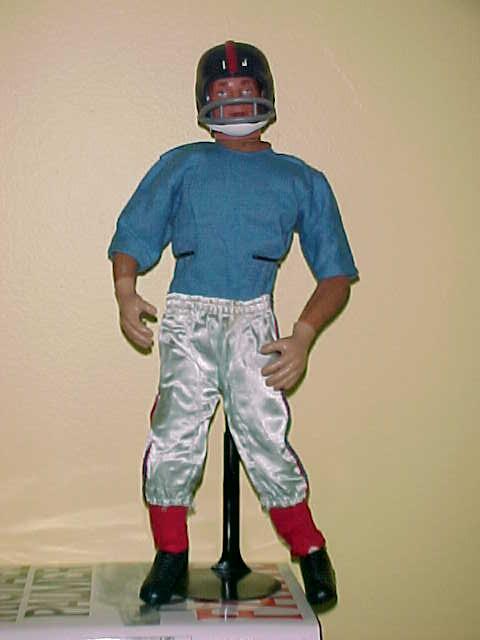 Since then his place in the history of action figures has often been neglected and forgotten but now it's time to return him to his rightful place of honor as the first true sports figure to be produced, long before Kenner even thought up their Starting Line-up figures.

Many believe he was "born" before his time but whatever the reason for his demise he is still fondly remembered for the hours of fun he provided.

In the late 1960's The Best Card Company released a series of Talking Football Figures, which were targeted at the lower end of the market and the Heroes of the Gridiron series, which was aimed at the more lucrative collectors market.

It wasn't until the late 1970's that another series of NFL figures was released, namely the Pro Sport Marketing Action Team Mates figures. These figures were the forerunner to the Kenner figures, and like Johnny Hero, are an often forgotten part of the history of Action Figures. Fairly crudely made they were sold through the Sears and J.C. Penny's toy catalogs.

The 1980's brought us probably the most popular and well remembered line of NFL figures, the Kenner's Starting Line-up NFL Action figures.

Despite their popularity these figures bore little resemblance to the players, but they were cheap and produced mainly for the kids market. Even more than 30 years later many of these figures can still be picked up in close-out stores or clearance sales and if you know what you're looking for there are also some real nuggets of gold to be found.

Then in 1999 sports card manufacturer Topps decided to turn their talents to producing a line of action figures entitled Topps Action Flats, but quite frankly they should have stuck to cards!

One of the best lines ever produced has been McFarlane's NFL Sports Picks figures. First released in 2001 they redefined the action figure market as they were probably one of the first to be produced and marketed purely for the adult collectors market.

One of my favourite lines is the Mezco NFL Extreme Athletes figures released in 2003. These figures were fairly unusual as far as Sports figures went as they were produced in the unique style of Urban Vinyl figures.

Next up were the Gladiators of the Gridiron Football Figures from the Pro Specialties Group and first released in 2004. These figures were poorly sculpted but were reasonably priced and well marketed.

Gracelyn are a small, relatively unknown company that have been producing their NFL Re-play figures since 2006 and are some of the best NFL figures ever produced with full articulation and excellent sculpting which deserve much wider regognition than they currently receive.

Although officially licensed by the NFL ToyQuest's Probot figures released in 2008 were both unique and innovative. The figures were fully articulated and featured a "flip" action head!

Also released in 2008 was Upper Deck's Nfl VINYL figures. Upper Deck produced two sets of these figures, an All Stars series and an MVP series, both of which were well received by collectors.

Want to know more about these figures?

Just click on one of the images below to find out if any of your NFL figures are rare:

Just click on one of the images below to find out ifyou have any rare figures...