What Basketball Figures Do You Have?

The first true basketball figures to be produced were Kenner’s Starting Line-up figures in 1988. These figures remain popular with fans and collectors to this day with an active secondary market on eBay.

Some of the more popular basketball Starting Line-up figures can sell for upwards of $100, not bad on an initial “investment” of only $1.99! 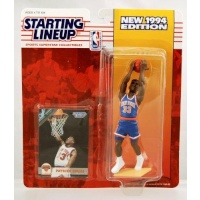 Kenner produced hundreds of these figures and were the first company to introduce the concept of chase figures and “short packed” figures.

Many of the figures were also only produced, or targeted, to specific markets and weren’t available in other areas of the country.

In 1998, after Hasbro bought Kenner, Mattel decided to get in on the action and acquired the license to produce NBA figures and a several series of figures, games and toys were planned.

Both the NBA and Mattel had high hopes for these but perhaps the timing was wrong as although these figures were better sculpted and painted than the Starting Line-up figures they weren’t as popular. This was possibly due to the bad press and difficulties the NBA were going through at the time.

In fact Mattel probably wished that they had stuck with cards!

Then in 2001 McFarlane Toys revolutionized the market with their Sports Picks brand of figures. These figures were the first to specifically targeted the older and more mature fan and collector with excellent sculpting and paintwork that created a truly life like product.

McFarlane truly raised the bar on how action figures were produced and marketed, as well as the expectations of collectors and fans.

McFarlane’s figures were also instrumental in re-establishing the popularity of the 6-inch scale figure which had been replaced by the 3 ½ inch figure after the release and popularity of the Kenner Star Wars figures.

Upper Deck, who is the largest manufacturer of sports collectibles and memorabilia, introduced their line of All-Star vinyl figures in 2006, which has since included several basketball figures.

These unique figures are produced in very limited numbers and have become popular with collectors but these are generally targeted at the high end of the market.

To find out more about these collections, and more, click on one of the images below.