What was the first Baseball Action Figure ever made? 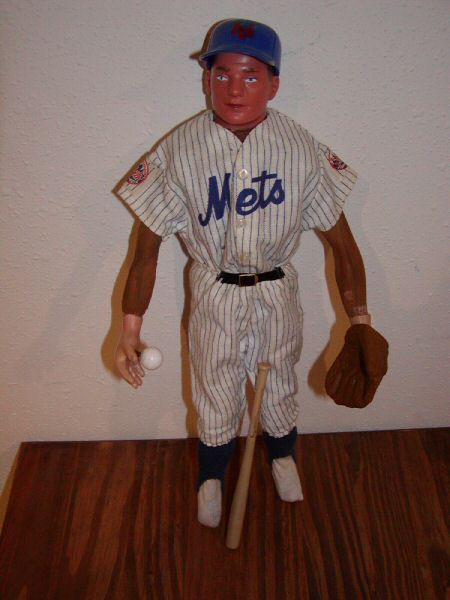 Johnny was a very basic, generic figure produced by Rosko Industries of New York in 1965, only a year after Hasbro's G.I. Joe was released. He came packaged in a fairly plain cardboard box featuring a track and field runner dressed in silk track shorts and a short-sleeved shirt with trim (piping) and was first unveiled in the 1965 Sears Christmas catalog.

With is blue eyes, crew cut and stoic expression he stood a magnificent 13 inches tall (one inch taller than G.I. Joe!) at the bargain price of only $2.97!

Made of a foam latex body that was molded over a bendable wire frame, Johnny was quite impressive in his time but even more impressive were his accessories. You could also buy a selection of authentic and detailed MLB Baseball uniforms to dress him in.

However, Johnny's career was probably the shortest in MLB history as he only lasted for two seasons in the Sears catalogue before he was axed.

Johnny opened the door for and has had a profound influence on all the sports figures that followed in his footsteps but it seems since then that his place in the history of action figures has often been neglected and forgotten but now it's time to return him to his rightful place of honor as the first true sports figure to be produced, long before Kenner even thought up their Starting Line-up figures.

Many believe he was "born" before his time but whatever the reason for his demise he is still fondly remembered for the hours of fun he provided.