Are You Sitting On An Action Figure Goldmine?

But he also needed to decide HOW he was going to pack them!

Did they need to be insured? Could he even find anywhere TO insure them?

And then's when he turned to me for help. It was also then that I realized how little information there really was out there for the collector.

And that's when I decided to create thi site for the Action Figure enthusiasts.

Since 2010 I have been researching and building a huge database of more than 10,000 action figures.

As a result you will find price guides, checklists, pictorials and information on virtually every action figure made between 1964-2008!

Comic books and action figures are a perfect fit as each is only bound by the limits of your imagination. As with many innovative figures Mego were one of the first to release a host of comic book action figures with their "Worlds's Greatest Super Heroes" line which included characters from both DC and Marvel comics.

Since then literally thousands of our favorite Super Heroes, and their protagonists, have been made as action figures. Some of the most popular are the likes of Batman, Superman, Thor, The Hulk and the X-Men to name a few.

But the figures aren't just limited to Marvel and DC but also many Dark Horse, Top Cow, Comic Ink and other publishers have had their characters turned into action figures.

One of the most popular of these is probably the Spawn character, created and produced by Todd Mc Farlane of McFarlane Toy's, which he set up just for this.

For more information just click on one of the images below... 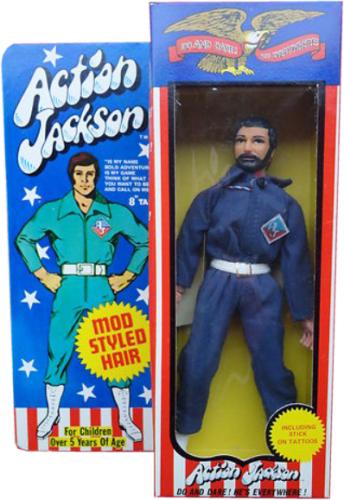 While researching and digging through stacks of magazines, comics and price guides I discovered thousand of figures from the weird to wonderful, ugly to beautiful, unusual to useless that often defied any logic or substance.

I have this vision of a workshop buried deep beneath the Earth's surface where three bespectacled men sit scratching their heads everyday for eternity thinking up new ideas for action figures, for believe me some of the things you can find out there are...

Well take a look for yourself and decide...<read more>

What is an Urban Vinyl figure?

If you're a bit more artsy than the average collector, then these will probably be right up your street.

The Urban Vinyl movement has been around for sometime but until recently has been pretty much an "underground" movement that hasn't been taken seriously by either the art collectors or action figure collectors.

But recently people have been sitting up and paying attention. Why?

Because most of these figures are VERY LIMITED hand hand and individually painted, often by famous artists or designers and sell for insane money on auction sites like eBay. But where can you get them?

Do you know who was the mother of ALL action figures?

OK....lastly we have THE ORIGINAL, MOTHER OF ALL action figures.

A tall sexy blonde who actually started of life as a German prostitute, strutting the streets of Hamburg supplying adult entertainment, until...

She was found, rescued and taken back home to America by the father of a seven year old girl who was looking for a play companion.

Now, you may think that an ex-prostitute wouldn't be the ideal playmate for a seven year old girl.

But much to everyone's surprise Barbie became and remains world famous to this day...<read more>

If you found this site to be enjoyable, informative and useful please help by spreading the love and sharing with your friends, family and colleagues!

It's easy to do and you will be helping me to help others benefit from the information here. All you need to do is click one, or moe of the buttons below!

What do you think?

Do you agree with the comments made here?

Tell us what YOU think...

Do you have any tips or advice for new collectors?